Illicit drugs are those which are usually classified by the Drug Enforcement Administration (DEA) as a controlled substance, indicating that they have little or no medical value, and a high potential for abuse, dependence, or addiction.

What Makes a Drug Illicit?

That said, there is much contention surrounding the DEA’s decision-making approach to classifying drugs. For example, some question why marijuana and LSD, two substances not commonly known to cause physiological dependence, are scheduled higher than much more dangerous drugs like cocaine and methamphetamine.

This seeming inconsistency is primarily because the scheduling system isn’t perfect. Moreover, cocaine and methamphetamine both have legitimate, albeit limited medical purpose. Conversely, while states have rapidly been decriminalizing marijuana or legalizing it for medicinal reasons, the federal government has yet (in fact, downright refused) to catch up.

Of note, some drugs that are not schedule may also be considered “illicit,” or against society’s norms. An example would be Salvia Divinorum, which is not classified as controlled by the DEA but is illegal in many states and use is strongly frowned upon by much of society.

For the purpose of this article, only illicit drugs scheduled by the DEA will be included.

Cocaine and it’s rock-like counterpart are stimulant drugs with a high potential for abuse. Crack cocaine is more potent than traditional powdered cocaine and is usually consumed by smoking rather than snorting. Long-term abuse can lead to seizures, heart disease, cardiac arrest, stroke, and damage to the nasal septum and surrounding tissues. GHB (Gamma-hydroxybutyric acid) found on the streets is produced in illicit laboratories, although the prescription drug Xyrem (sodium oxybate) is also a form of GHB. GHB is most often used for non-medical purposes as a party or club drug and is also notorious for its use as a date rape drug. The side effects of GHB include extreme drowsiness, unconsciousness, and in extreme cases, overdose, which can result in seizures, coma, and even death.

According to the National Institute on Drug Abuse (NIDA), hallucinogens and dissociative drugs “distort the way a user perceives time, motion, colors, sounds, and self. These illicit drugs can disrupt a person’s ability to think and communicate rationally, or even to recognize reality, sometimes resulting in bizarre or dangerous behavior.”

These drugs include the following:

Despite its legal status in a number of U.S. for medical and even recreational purposes, marijuana is still illegal on a federal level as well as in many states. Although it is not known to be physically addictive or result in withdrawal symptoms, it can become psychologically addictive and a difficult habit to break.

Marijuana use can sometimes cause unwanted side effects such as anxiety and paranoia. Long-term heavy use can impede an individual’s level of motivation and affect their social life, as well as professional or academic performance.

Synthetic cannabinoids or synthetic marijuana are psychoactive chemicals that produce effects which often do not resemble marijuana at all. They are often found as liquids for vaporizers or are sprayed on dried plant materials for smoking.

These substances, which are commonly found by names such as K2 and Spice, can cause hallucinations, psychosis, and aggressive or violent behavior.

MDMA is a synthetic “designer” drug that works as both a stimulant and a hallucinogen. According to NIDA, its effects resemble those of both amphetamines and mescaline. There is some contention among researchers whether MDMA is a stimulant drug with hallucinogen properties or a drug that should be in a class of its own.

Although MDMA is not considered to be physically addictive, it can be habit-forming. Furthermore, MDMA is often combined with other substances including alcohol, ketamine, methamphetamine, and cocaine, which can contribute to its overall addictiveness. Methamphetamine (meth) is commonly found in powder form, while crystal meth resembles glass or bluish-white rocks. Meth has a high potential for abuse, and regular users often consume it in a binge-and-crash like fashion that can go on for days to weeks at a time. Its stimulant properties can result in cardiovascular problems, and effects on the brain can produce delusions and hallucinations as well as aggressive, violent, and even psychotic behavior.

Rohypnol (Flunitrazepam) is a sedative up to ten times more powerful than the popular benzodiazepine Valium. The drug is usually available as a pill and users often crush the pills into powder and snort the residue, sprinkle it on marijuana, smoke it, or inject it.

Like GHB, Rohypnol is infamously used as a date rape drug – it is sometimes added to an alcoholic drink at parties and clubs unknown to the consumer, thus rendering them incapacitated and paralyzed. They may be conscious and aware of what is happening around them but are powerless to move or defend themselves.

Opium, Heroin and Other Opioids

The effects of illicit opioids are similar to that of prescription painkillers, in that they induce pain relief and euphoria. Opioids are synthetic variants of opiates, which are naturally-occurring alkaloids found in the opium poppy. Opium itself is illicit, while compounds contained within the dried latex, such as morphine and codeine, are available by prescription, but commonly misused or diverted to the black market.

Illicit opioids include the following:

Heroin is a popular and highly addictive illicit street drug derived from morphine, an opiate alkaloid that naturally occurs in the opium poppy. It is a powerful painkiller and in large doses can cause heavy sedation and unconsciousness.

Heroin can be snorted, smoked, or injected. In addition to overdose and other dangerous effects of addiction, heroin users who inject may develop abscesses, infections, and collapsed veins. Those who share needles are at high risk for blood-borne diseases such as HIV and hepatitis C. 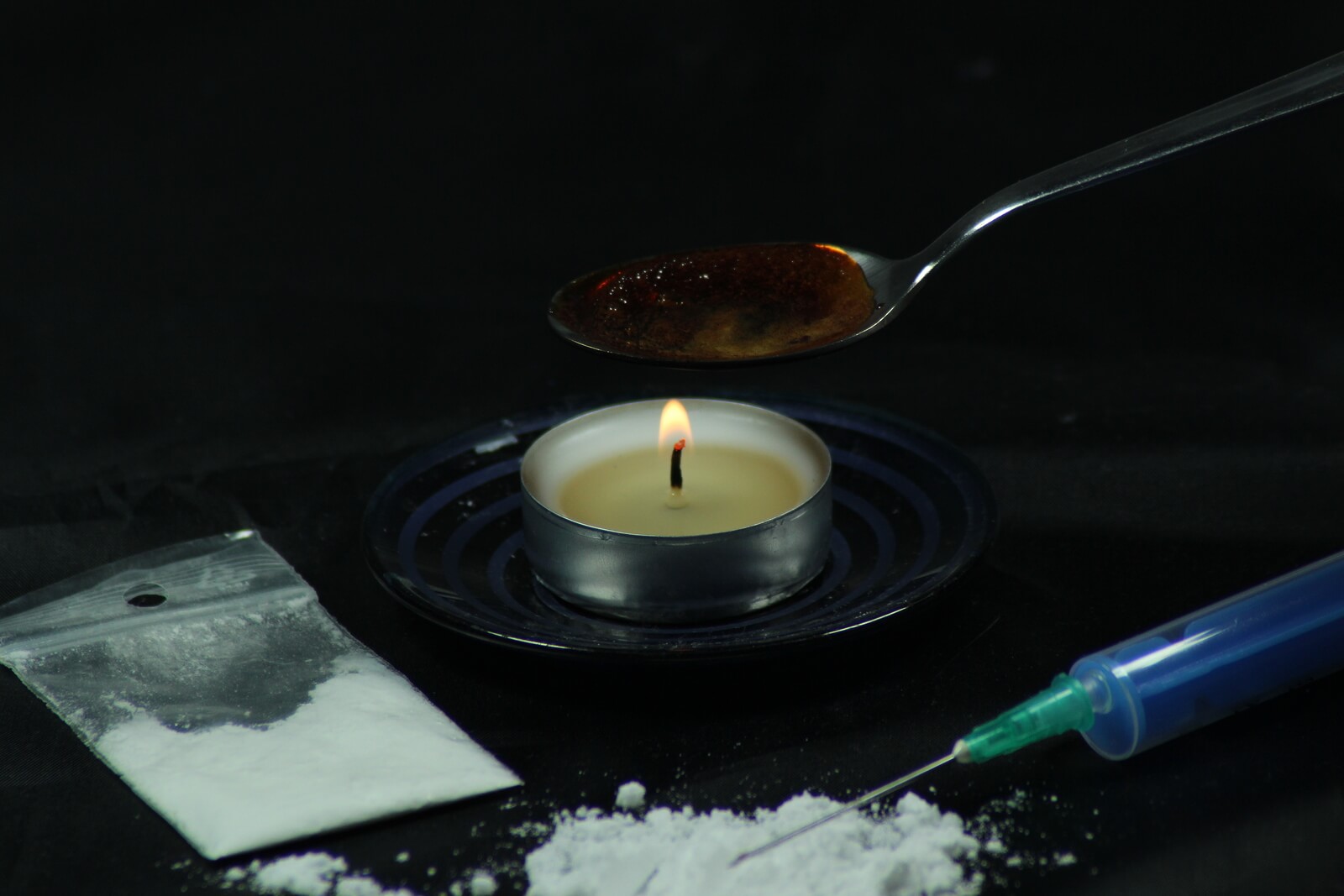 Fentanyl began as a prescription painkiller with limited use. Currently, it is indicated for the treatment of severe pain when all other methods fail, as well as general anesthesia for surgery.

Illicit fentanyl, however, is made in clandestine labs, often in China, and sold deceptively on the street as heroin, oxycodone, or other relatively weaker drugs. Fentanyl is up to 50 times more potent than heroin and is involved in tens of thousands of deaths each year in the United States alone.

Carfentanyl is similar to fentanyl in effect but is also 100 times more powerful. It is not meant for human consumption and is only approved for use by veterinarians for the sedation of large animals such as elephants. Still, carfentanil can be found cut into other illicit drugs and is responsible for a number of deaths in both the U.S. and Canada.

Other illicit opioids include U-47700 and fentanyl analogs. Also, a street drug referred to as “Grey Death” has been found to contain U-47700, heroin and other opioids including fentanyl and carfentanyl.

People who abuse anabolic steroids usually consume them orally or inject them into muscles. Steroids can also be administered topically to the skin as a gel, cream, or patch.

Regardless of an individual’s drug of choice, if a person is physically or psychologically addicted, he or she desperately needs professional help. In addition to mental and physical problems and impairments, prolonged or excessive drug abuse and addiction can adversely impact a person’s relationships, professional career, and academic goals.

Comprehensive, evidence-based treatments, such as behavioral therapies and counseling, help to heal the emotional and mental impacts of addictive substances. Likewise, they teach individuals the coping skills they need to achieve abstinence, prevent relapse and experience long-term sobriety and well-being.

Harmony Treatment and Wellness employs professional addiction specialists who provide clients with the tools and support necessary to achieve and maintain their recovery goals indefinitely.

Recovery from addiction may be a life-long endeavor, but you don’t have to it alone. Contact us today to discuss treatment options and discover how we can help you on your path to recovery!